there is a big RED truck in the driveway 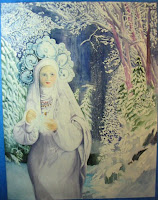 ok let's see, i finished ice princess
and i've started on the next one which is elen of the ways-she's associated with ley lines and reindeer- and i am sort of at the 'rough' stage
not quite to layout yet
meanwhile i've been sick again.
pain all over my entire body, and now i am wondering if it's something more then just thyroid as i've been taking the meds daily
this laid me low for a few days, i felt better then got sicker
and it's seeming to follow a pattern now, ... some improvement, then right back to full body pain....and exhaustion....i'm so very very tired most of the time.
it's hurting to sit here and type right now

in garden news, my snow peas are up, so is the spinach, chard, lettuces, garlic, leeks, onions, mint, blueberries, catnip, and of course my beloved violets
the seedlings i started in the house seem to be doing ok, not as good as normal years but then this wasn't a normal year.

in the kitchen, i started to use some of the hard white wheat, it makes a softer crumb which bernie likes better, it tastes different from the hard red wheat too.
i am going to alternate the wheats and sometimes mix them

i also made yogurt....it's been a while,
muffins (apple cinnamon that bernie said were wonderful)
bread (of course)
and sausage/peppers/onions and potatoes for last night's supper

with all this cooking, the chickens are extremely happy as they get the scraps, parings and peelings
happy chickens equal happy eggies

in knitting news, i am and i'm not knitting
it actually hurts to hold the needles for too long!
my hands twitch for the want of something to do
they are so used to 'sitting down means hands knit'

everything here is in slow motion, and life is in a bubble
with bernie working nights, and me tiptoeing around during the day so he can sleep
and me being in pain a lot
we're just doing what we must to survive
animals get taken care of but not a huge amount of garden walks for them
things get put off that aren't 100% essential at this time
i don't even use the van during the day (yes i know i am reclusive at best) i am trying to save the gas
and i worry that me leaving the house is going to disturb bernie's sleep
any appointments i had i either have to cancel or get rides because i truly never know what time he'll be getting in...
there are some days he doesn't get home until 3pm and he has to leave again at 9pm!
yes i am terribly worried about his health
and when i worry about him i cook for him
he's losing weight though cause he's not eating enough during the night
oye
so there you have it.....life such as it is here goes on
but in a bubble

bernie's birthday eve....sorta like christmas eve but with bernie!

he's working though
i have his cake and his card
his present will be at some time in the future however....
i have to say, the 8 weeks over the road training really seems to have changed him
he's much more aware of how truly blessed he is
how surrounded by love
and how much he's always BEEN loved
my parents adored him
i adore him (although there are TIMES............)
our animals adore him......
his sisters too
now he's starting to realize how a lot of people aren't that lucky

the cats have been climbing all over him almost constantly while he's been home.
the ducks and chickens are thrilled when they see him come down to take them out
the other day i was taking them out and while i was, i said to them 'mommy's got a BIG surprise for you.........'

and bernie walked out! OMG they all went nuts.... they were so glad to see him

we spent part of this afternoon talking about how far we've come, how far he's come personally
and what he thinks about it all
i love when he settles to talk to me like that
i swear i live for those kind of talks with him
so tomorrow is his birthday..... 58
we've been together since he was 21 and i was 19.......... wow.......... look at how LONG
we've had ups and downs but somehow.......we've managed to keep choosing each other every day
amazing huh?